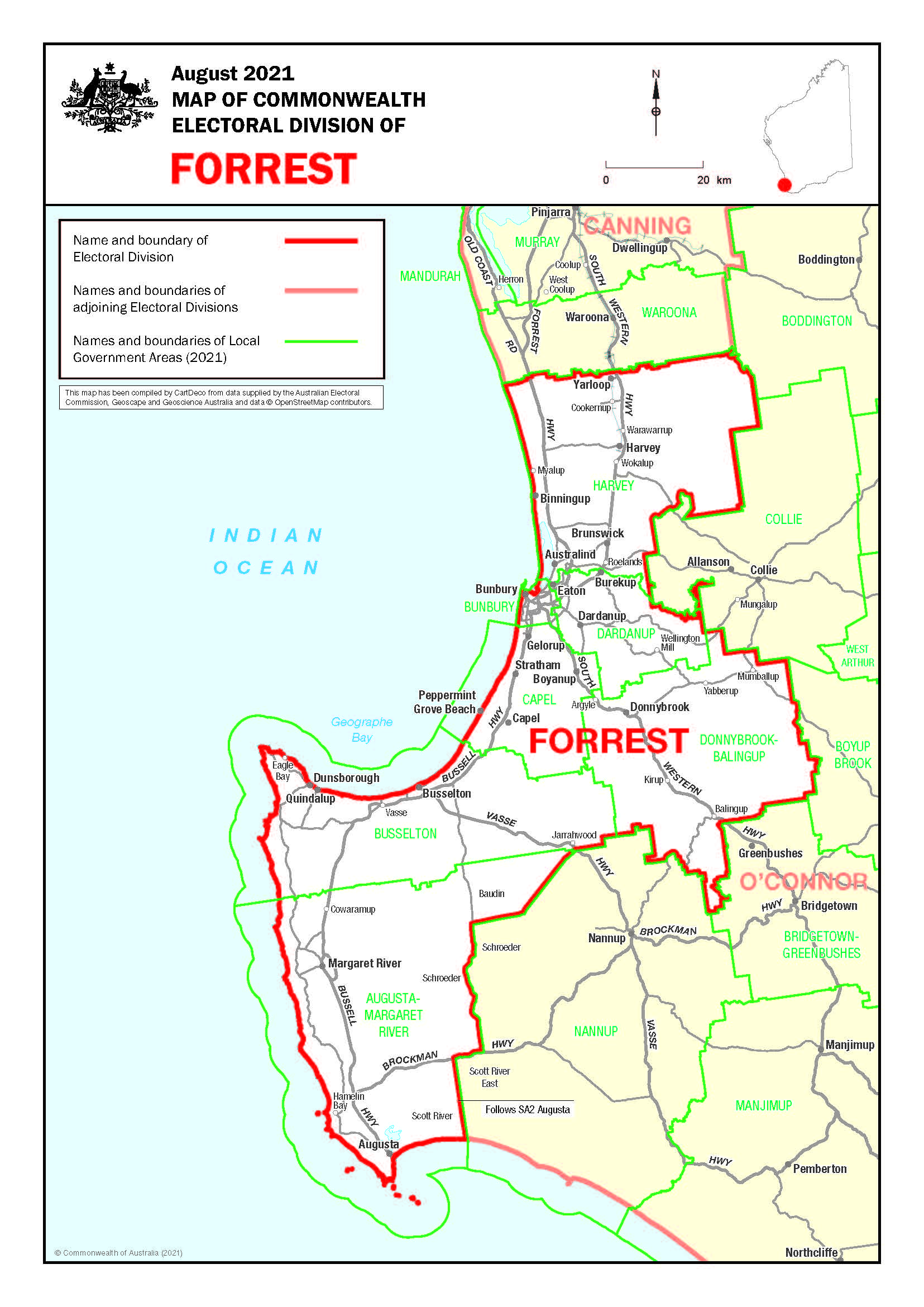 Known for rolling green hills, coastal communities and a diverse range of agricultural pursuits including dairy and beef, Harvey Shire is home to 28,299 residents.

Harvey has gained a name for itself all around Australia with the brands Harvey Fresh and Harvey Beef, however there is much more to the 1 735 km² that is the Shire of Harvey.

Also within Harvey’s boundaries are the coastal towns of Myalup, Binningup and booming Australind, which is home to the expanding suburbs of Kingston and Treendale, all well known for being very family friendly with good fishing, surfing and a relaxed feel. It’s no wonder the Shire brand is together, towards a better lifestyle.

Bunbury ‘the city of three waters’ is home to 31,683 people and is the major city for Forrest. Bunbury’s port facilities export produce from all around the South West and beyond. Known as the gateway to the South West, Bunbury is also itself a popular tourist destination.

A coastal lifestyle combined with promising business prospects only a few hours from Perth has sustained Bunbury’s prominence over the past decades. With the only A-class art gallery south of Perth, local and international live performances at the Bunbury Regional Entertainment Centre, numerous festivals and shows held throughout the year and a bustling night life, Bunbury’s strong focus on the cultural and social side of life suits all ages.

The deep gullies and undulating hillsides of the Dardanup region have captured the imagination of many passers by. A quest for food, drink and relaxation will often lead tourists to the Ferguson Valley, Dardanup Shire’s premier tourist destination.

Fine wines, captivating views and a serene atmosphere attract visitors from all over Australia. However, Dardanup shire is not all quiet drinks by the creek; the town site of Eaton is the population and retail, attracting many young families, retirees and businesses. There are 14,579 people who call the family friendly shire home.

The Shire of Capel has undergone rapid growth in population, tourism and industry. With large growth, especially in the northern suburb of Dalyellup, the 18,161 strong population is set to increase dramatically even further.

Capel has 27km of virtually uninterrupted pristine beach side, lending itself nicely to those in favour of the waterside life. Along with this, Capel offers world class wine and cheese produce, testament to it’s strong dairy industry.

Along with mineral sand mining and various agriculture, viticulture and aquaculture pursuits, the Shire of Capel also boasts the only naturally occurring Tuart forest in the world. The Shire is diverse in places to call home, on the farm, in town, in the bush, the Shire of Capel certainly lives up to it’s brand of a Lifestyle of Choice.

Industry ranges from sandstone quarrying to tourism, all set in an area rich in history and culture. The Apple Fun Park is very popular with the younger children while the numerous art and craft outlets cater for the less adventurous.

On the shores of the world renowned Geographe Bay lies the thriving City of Busselton. The Busselton region is one of the South West’s most popular tourist destinations for both domestic and international visitors. It boasts spectacular surrounds  from rugged, weather beaten cliffs to the tranquil settings of Dunsborough and Meelup Beach, along with breathtaking subterranean caverns, famous wineries and ancient forests.

Proclaimed a city in early 2012, Busselton has become the proud ‘events capital of the South West’ by hosting more than 80 attractions a year.

It is no wonder this region is fast gaining a name for itself internationally. Busselton industry incorporates vineyards, dairy, horses, farming and tourism, and caters for over 40,333 residents.

Another name famous the world over, Margaret River plays host to some of Australia’s most premium wine labels and is continually cementing its position as a leading grower of vines. In other circles, Margaret River is known around the world for some of the most impressive surf conditions.

The shire, encompassing 2,123 km² is home to 16,701 as well as home to some ofWA’s professional fishing industry. Large areas of the Augusta-Margaret River Shire are dedicated to state forest or National Park. The Leeuwin-Naturaliste National Park, with its towering Karri and Jarrah forests and breathtaking caves claims to have the most visitors of any national park in Western Australia, while in total, the whole region claims host to more than 500 000 visitors every year.