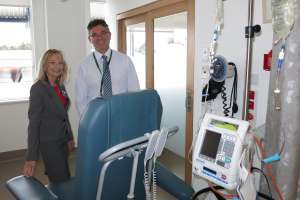 Member for Forrest Nola Marino said more life-changing and life-saving drugs will be available on the Pharmaceutical Benefits Scheme (PBS) as part of the Turnbull Government’s rock solid commitment to ensuring that Australians have access to vital medicines when they need them.

New medicines worth $310 million have been added to the PBS today.

Mrs Marino said Ivacaftor (Kalydeco®) is now available for children aged two to five years with cystic fibrosis. It’s a life-changing drug that addresses the causes of cystic fibrosis rather than just the symptoms.

“Without government subsidy, the treatment would cost each patient around $300,000 per year,” Mrs Marino said.

“Kalydeco has been listed on the PBS since 1 December 2014, but until now has been restricted to patients aged six years and over affected by the cystic fibrosis G551D gene mutation.

“For many families this vital drug has simply been out of reach. That changes today.

“Like all the new medicines listed on the PBS from today, Kalydeco is now available for $6.30 per script for all concessional patients and $38.80 for general patients.

“For the first time, a treatment for idiopathic pulmonary fibrosis (IPF) will be listed on the PBS today.”

IPF is characterised by the progressive deterioration of lung function and has debilitating effects on quality of life. This listing will save approximately 1,470 patients each year around $39,700 per course of treatment.

Blinatumomab (marketed as Blincyto®) is a new treatment for a rare cancer – relapsed or refractory Philadelphia chromosome negative B-precursor acute lymphocytic leukaemia (ALL). It’s now on the PBS – saving patients around $127,700 per course of treatment.

Mrs Marino said there is a high clinical need for an effective treatment for these patients. Blincyto provides a means to induce and maintain cancer remission to allow treatment with hematopoietic stem cell transplant. It works by targeting and encouraging the destruction of lymphoma cells.

“Since coming into Government, we have added around $6 billion of new drugs to the Pharmaceutical Benefits Scheme.

“Unlike Labor, we are adding drugs recommended by the Pharmaceutical Benefits Advisory Committee without fear or favour. Labor delayed the listing of seven vital drugs.

“Australia’s PBS is one of the foundations of our universal health care system and is the envy of many countries.

“The Turnbull Government has a rock solid commitment to Medicare and part of this commitment is ensuring people have access to medicine when they need it. We are delivering on this commitment.”

PBS listings are published on the Schedule of Pharmaceutical Benefits which is available through the PBS website at pbs.gov.au.

A little about Nola

Nola was elected as the Federal Member for the seat of Forrest on November 24, 2007

She is currently the Assistant Minister for Regional Development and Territories and has been able to speak up for Forrest by investigation and developing policy areas which are of benefit to her constituents.

There has been a big win for regional families by Nola when she led the way to help reverse Labor’s cuts to Youth Allowance access. This was of great assistance to families with children who wanted to pursue their education dreams beyond high school.